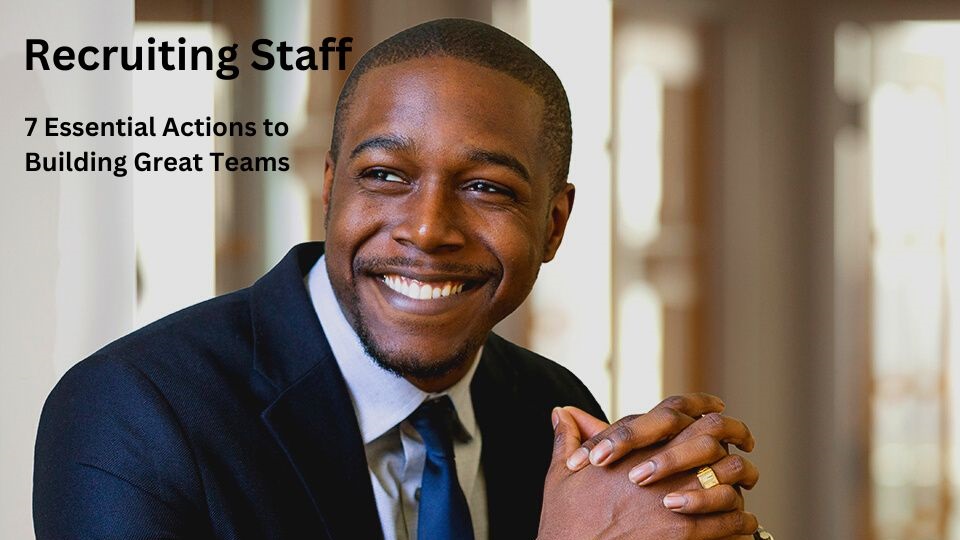 How to recruit staff to build a great team is a critical task for every entrepreneur and leader with a growing business. As a manager of a team your performance is closed linked to the performance of your team.

Hiring the right staff can make or break a team.  I share my best tips of how to recruit the right employees for your team to help you deliver great team performance.

And at the end of the article, I share a hiring method which works even better than the traditional interview process to recruit great staff.

1. Staff Recruiting is a critical job of any leader

Looking at the statistics, having the wrong business partner or team members is one of the top three reasons for new business failures.

And if you think larger business can escape poor hires, think again. The quality of the team impacts decisions at all levels. The more senior the decision maker, the larger the impact of those decisions. Plenty of large businesses fail because of poor decisions.

So recruiting staff is a critical job of any leader of a team. Get the hiring right and getting everything else right becomes a lot easier. Hire the wrong people and the hill just became a mountain!

If you listen to interviews or talks with the likes of Steve Jobs or Mark Zuckerberg or in fact any leader from any growing business,  one of the first things they talk about is how they go about hiring the right staff to create a great team.

I was at innocent drinks when it had over 200 employees and one of the three founders still interviewed everyone before an offer was made. That is how important they viewed the hiring of their staff.

So as a leader of a team, we need to put enough time and effort into ensuring that the staff we recruit are the right hires and lift the team up in terms of team culture and team performance.

I personally don’t think the leader of a team has a more critical job that recruiting staff that are going to work in that team.

So let’s talk about how we can improve our chances of hiring the right people to improve the success of our team.

2. Recruit staff for cultural fit & attitude OR hire for skills – which is more important?

Let me ask you a question. Which is easier to teach – skills or attitude? In my experience, teaching skills is a lot easier, hands down. I think you can influence attitude. I don’t think you can teach it.

Therefore getting the right attitudes in the staff we recruit is a lot more important than getting the right skills. Imagine your job as a manager with a team of self-starters – those willing to make decisions and take action – compared to a team who need you to make a decision on everything.

I know having a team of self-starters is a lot more fun as a manager, and as a team you deliver a lot more in terms of output. So build into your recruitment process a focus on discovering the candidate’s attitude and approach as well as checking on their skills.

The key message is hire for attitude and cultural fit before hiring for skills.

3. Be Clear on the Values and Behaviours Representing You and/or the Company

A company that has not taken the time to identify its own collective values and then detail out the behaviours that are represented by these values will struggle to recruit the right staff members to continue building the company culture.

Behaviours are much more tangible and it’s easier to describe and train others on what to look for. You can test for, and observe, behaviours during the hiring process.

By being clear on team or company values and behaviours, you set yourself up, and your team up, for recruiting staff with the right cultural fit and attitude. Hiring the right team members gives you strong foundations for success.

Research has proven that people with a similar cultural fit or values to the wider team are:

All these are valuable to

Recruit for behaviours and values first – everyone will be better off.

According to GlassDoor, 61% of employees say the realities of their new job differ from expectations set during the interview process.

And of course, company and team requirements change as the business grows and adapts to new situations, new markets, new competitors etc. The requirements should not change that much in the say 3 months between writing the job advert and the person starting.

Future proof your staff recruiting as much as possible by looking out for people who enjoy learning and have skills that you expect to need in the near future. This reduces the number of hires you will need to make over time, gives you a route to promote from within and helps you build a successful team more quickly.

5. Train the hiring managers (if you’re not the one hiring)

Once you know what type of person you want and the skills needed to overcome the problems you face, you are halfway to recruiting staff to make your team more successful.

If you are in a larger business with more than one management layer, make sure you communicate to all hiring managers the value and behaviour requirements that all candidates should demonstrate.

What steps are you going to put in place to get hiring consistency across your business? Some ideas include:

Don’t take for granted the importance of training all hiring managers about what is needed and why it is needed. Put in place training to cement these requirements into the hiring process.

I always found it useful to get the team members involved in the recruiting process for several reasons:

Candidates can often be a lot more off guard in an informal setting when they are meeting their future colleagues rather than their future boss.  Creating this setting can reveal quite a lot about each candidate which is very useful in the recruiting process.

Use the feedback you receive. I usually do this in a group setting so that everyone involved in the process can give feedback and then you can make a decision to hire – or not – in the meeting or following the meeting.

Involving multiple people in the hiring process helps get a balanced view of each candidate and I think generally leads to better staff recruitment decisions, better team buy in and results in a better more effective team

Lastly, while the tradition interview process is time efficient for the hiring company, once a candidate develops strong CV writing and interviewing skills, it can be much harder to work out if that person will work out well in practice. So I have an alternative approach to put forward which is a lot harder to game.

7. Audition rather than Interview to recruit staff

During an interview process you are asking the candidate to describe how they would approach a given situation or solve a given problem. They can provide real examples or make them up. 85% of people apparently lie on their CVs per Hire Right. One assumes answers given in interview are not always accurate and the interviewer will only pick up on so many of the inaccurate answers.

So rather than getting the person to tell you what they have done, get them to show you or demonstrate their skills. This approach is much harder to game and gives you a better assessment of their skills and ability to solve your problems. Hence audition rather than interview.

We suggest trying to build the audition around a mini project that the person can do in your offices over a period of half a day or longer.

Let me give you an example of how to set these exercises up:

Invite the candidate into your offices and explain that you would like them to undertake a mini-project while at your offices. Tell them they can speak to anyone in the office and ask for any information needed (work out what is okay to share first).

The output could be a presentation outlining their findings and conclusions.

The project could be:

Create a project with an output that would help you solve or start to solve a live problem or a recent problem which is not in public domain.

This approach gives you a real insight into:

And a whole host of other benefits.

It also gives the candidate the ability to actually work in the offices and meet a lot of the people they might be working with and get a feel of the style of how the company operates. This improves retention rates.

The downside is auditioning usually requires more time from the candidate and your team overall.

Auditioning provides a lot more insights into the person and their abilities than interviews. Setting up the mini-project carefully is important and freeing up team members to help candidate are both important.

Think how you could use this approach in your hiring processes.

The staff that you recruit into your business will help make or break your business. Your team are incredibly important to get right whether you are 4 people in the business or 400 or 4,000.

Attract and keep great staff members and your business will have a huge advantage of those that are not able to separate the great from the okay when recruiting staff.

We know that many managers and companies do an amazing job of hiring their staff. There are many more companies that do not do a great job because they have not taken the right steps to set themselves up for success.

Hiring the right people into your business or team is a critical activity for any growing company. Make sure you spend enough time setting up how you are going to hire well.

7 Methods to Motivate Your Team

How to Set Objectives for the Team

5 Coaching Skills for Leaders and Managers

This website uses cookies to improve your experience while you navigate through the website. Out of these cookies, the cookies that are categorized as necessary are stored on your browser as they are essential for the working of basic functionalities of the website. We also use third-party cookies that help us analyze and understand how you use this website. These cookies will be stored in your browser only with your consent. You also have the option to opt-out of these cookies. But opting out of some of these cookies may have an effect on your browsing experience.
Necessary Always Enabled
Necessary cookies are absolutely essential for the website to function properly. This category only includes cookies that ensures basic functionalities and security features of the website. These cookies do not store any personal information.
Non-necessary
Any cookies that may not be particularly necessary for the website to function and is used specifically to collect user personal data via analytics, ads, other embedded contents are termed as non-necessary cookies. It is mandatory to procure user consent prior to running these cookies on your website.
SAVE & ACCEPT